It’s always nice to get away in winter and catch some sun. The problem is that most of Europe is probably cold and wet! So, if you want some actual heat, you need to venture further afield, not ideal if you’re looking for a short break.

I’d heard about the Canary Islands being the place to go during the winter so, rather spontaneously, and without much research, we booked a five day trip. The Canary Islands are part of Spain but located off the southern coast of Morocco, only a 4 hour flight away from London – there is also no time difference so you’re not losing any hours when you get there.

The islands (including Tenerife, Fuerteventura, Gran Canaria, Lanzorote, La Palmas, La Gomera and El Hierro) are an archipelago and formed from volcanic activity. We decided to pick Gran Canaria as it had direct flights from London – it also seemed to have a variety of things to do and is home to Las Palmas de Gran Canaria, the 8th largest city in Spain.

On arrival, we really did feel the warmth – it was great. We got the no.60 bus from the airport which took us straight to Santa Catalina in Las Palmas de Gran Canaria, very close to Playa Las Canteras (beach). You also have the option to stay near the old town which is a short bus ride away from the beach. 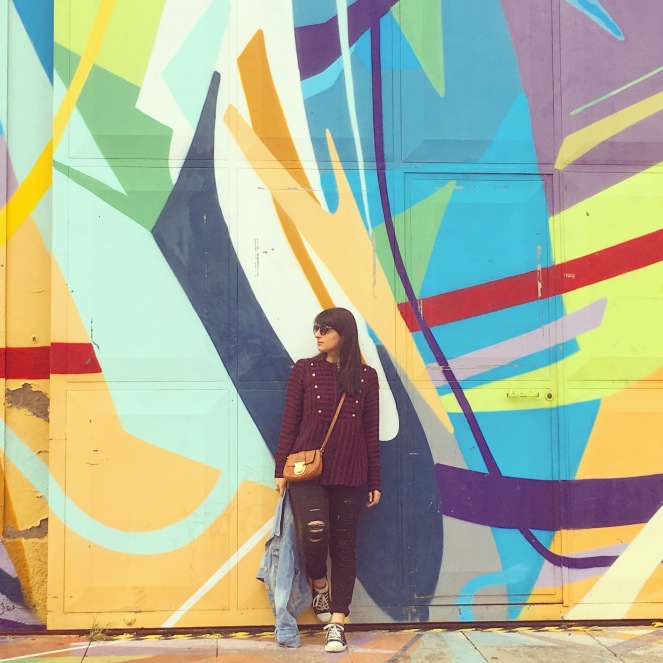 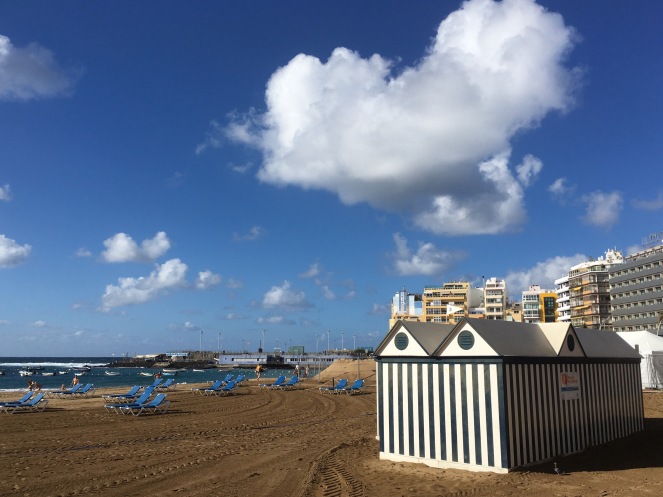 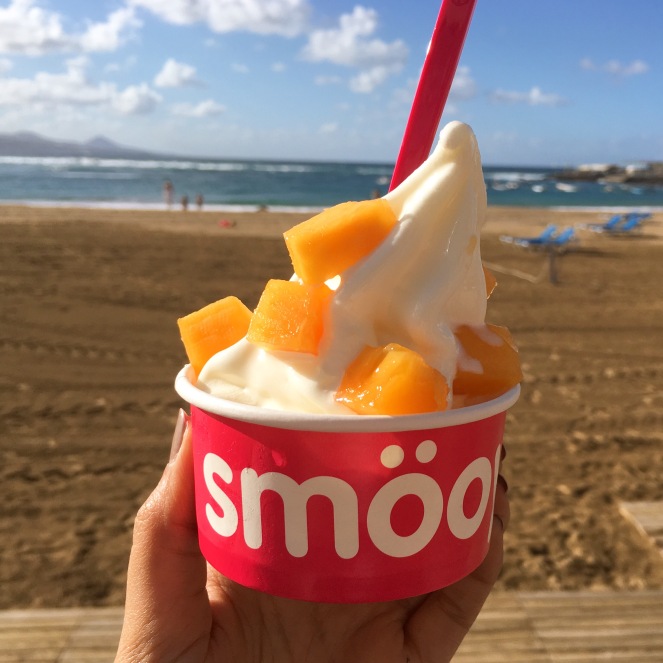 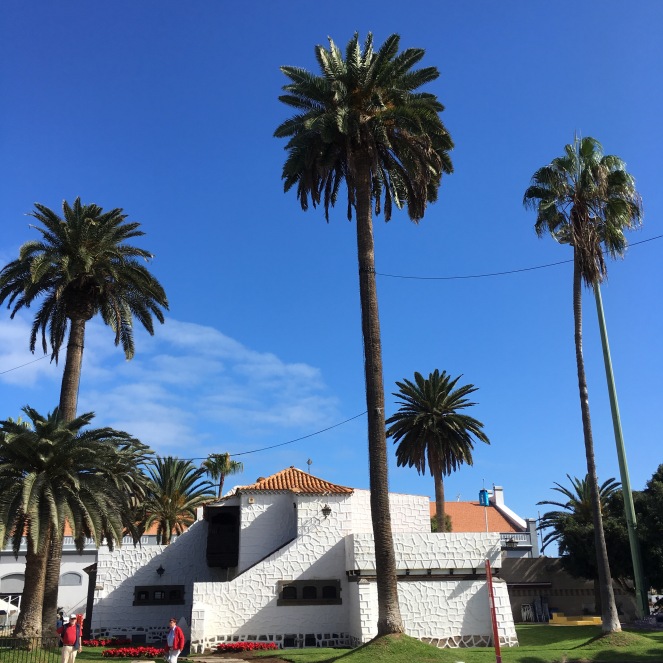 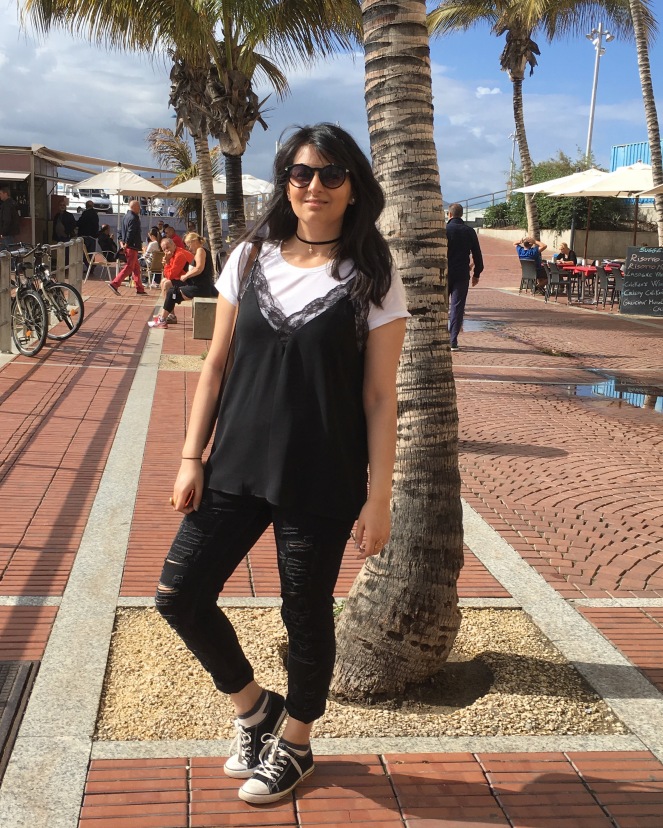 The reason I mentioned not having researched the trip will now become abundantly clear. The weather in Las Palmas was very unpredictable – it became windy, cloudy, rainy and cold on a couple of days which wasn’t great! But little did we know that the south of the island  (Maspalomas) was a lot warmer  and nicer! If you’re planning a trip here, make sure to book a hotel in the south as the probability of good weather is a lot higher.

In terms of Las Palmas, I really liked the old  town which had a retro vibe and reminded me of photos I’d seen of places like Cuba. The architecture was beautiful and varied, full of colourful buildings like in Notting Hill, except on crack!  I  would recommend spending a few hours exploring  the old town, known as Vegueta, and visiting Santa Ana Cathedral for amazing views of the City. Casa Museo de Colon, the house (and now a museum) where Columbus stayed on his way to the Americas in 1492, was also interesting and touched on the island’s marine trading history.   For shopping, Calle Triana is worth a visit as it’s the main shopping street in Las Palmas.

For food, we found that the restaurants by the beach in Las Palmas were quite touristy. Instead, our hotel recommended going to Calle Ruiz de Alda, a street with lots of restaurants. We tried 200 Gramos which was a great burger place and extremely good value. Another place I would recommend is Mercado del Puerto, a little like Borough market, with lots of vendors offering different types of food – it has a vibrant atmosphere and is a good option if you’re looking for tapas. It was also full of locals so you know that it’s the place to be! 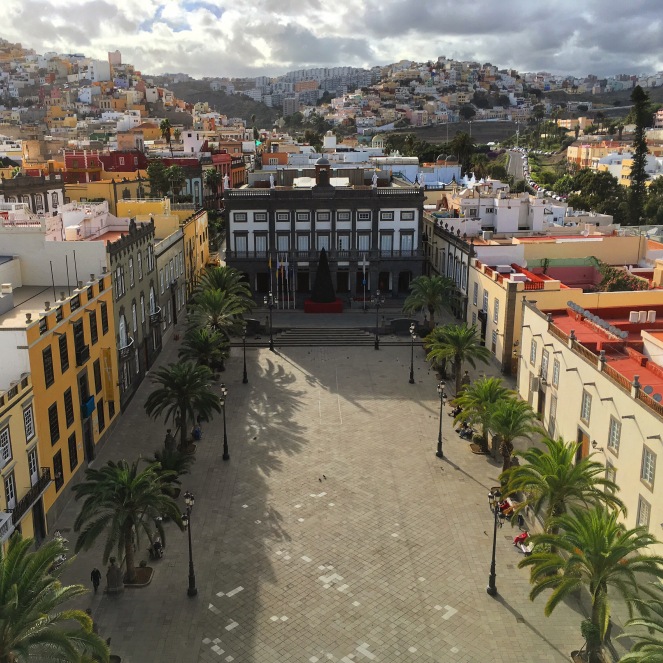 Maspalomas, in the south of the island, was amazing. About an hour and a half’s drive away from Las Palmas, it literally felt like you were in a totally different country! We soaked in the sun, even if it was just for the day! As previously mentioned, I would highly recommend staying here if you’re visiting as I found that the vibe was a lot nicer (and more upmarket) than Las Palmas. It is also home to a nature reserve with beautiful sand dunes that continually change shape. The beaches are clean and sandy and the promenade hosts a range of restaurants and shops. Try the restaurant El Senadoro by the beach – I had the seafood linguini with an amazing fresh smoothie! 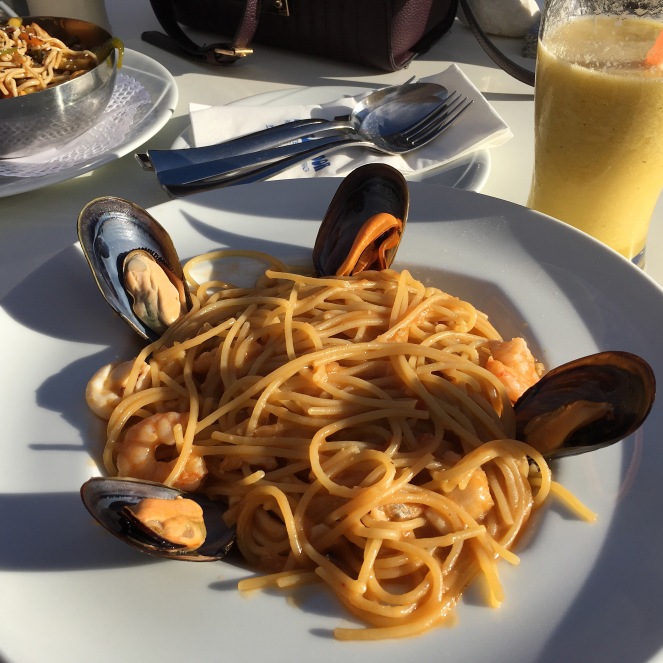 Another must see is Roque Nublo and there are also many recommended hikes in Gran Canaria as it has a rugged and mountainous landscape in the centre of the island (probably what shields Maspalomas from the changeable weather!). Unfortunately, due to the poor weather conditions, we weren’t able to do the hike or get a view of Roque Nublo during an excursion that we had booked. Something to come back for I think!

Have you been to Gran Canaria or any of the other Canary Islands? What did you think?